Portsmouth Partnership celebrates after winning the 65th Annual Portsmouth Invitational Tournament Championship The 65th annual Portsmouth Invitational Tournament (PIT), is a annual event which features 64 of the nation’s top college seniors competing in a four-day, 12-game event in front of team representatives from across the NBA. The scouts on hand will have a difficult job ahead after the talent that was showcased throughout the tournament which concluded last Saturday w
0 comments
By Cardell Dudley

Cavanaugh's 29 Leads GW Over Toledo In CBI First Round

Toledo simply had no answer for GW forward Tyler Cavanaugh as they watched him score a game high 29 points Taking on the Toledo Rockets in the first round of the College Basketball Invitational, George Washington, led by the inside dominance of forwards Tyler Cavanaugh and Patrick Steeves, walked away with a 73-69 win. With their 20th win, the Colonials advanced to Mondays quarterfinals where they will take on the winner of Stony Brook and Illinois-Chicago. GW (20-14) started
0 comments
By Cardell Dudley

Colonials Rebound In Win Over Bonnies

Grad Student Tyler Cavanaugh posted a career high 33 points in leading GW to a inspiring win over St Bonaventure Following a gut wrenching loss to VCU, the Colonials hosted St Bonaventure, a solid team featuring a deadly back court in Jaylen Adams and Matt Mobley. Adams (21.4 ppg) and Mobley (19.8 ppg) are ranked first and fourth in the Atlantic 10 in scoring while Adams also leads the A-10 in assist (6.2). Needless to say, the Bonnies posed a great test to the resolve of GW,
0 comments
By Cardell Dudley

Shocking ending snatches victory away from the Colonials

Forward Tyler Cavanaugh battled his way to 13 points and 17 rebounds yet an unlikely ending ensured it wouldn't be enough With .4 seconds, VCU guard Jequan Lewis drew a foul while the Rams looked to inbound the ball. Lewis knocked down both free throw's to help VCU steal the win from George Washington 54-53, denying what looked to be another memorable GW victory, after junior forward Yuta Watanabe knocked down a corner 3-pointer. GW and VCU fought all game long as two program
0 comments
By Cardell Dudley

George Washington (12-9/4-4) led by GS Tyler Cavanaugh's 18 points and 6 rebounds fought their way to a victory over Saint Louis (6-15/2-7) 63-55 in front of a packed Smith Center. In a grind it out game, the Colonials battled back from a 13 point deficit in the first half after seeing the Billikens go 8 for 8 from the field to start the game. GW however was cold from the field, shooting 31 percent from the as they trailed St Louis 29-23 at the half. The Colonials found their
0 comments
By Cardell Dudley

Yuta Watanabe finished with an efficient 14 point, 4 assist effort but his defense stole the show George Washington returned home for the first time in three weeks to host dangerous Davidson in a key conference battle. The Colonial's was looking to right the ship after dropping their last contest on the road at St Joseph's 68-63 after allowing a run late in the game. GW didn't have such problems as they defeated Davidson 73-69, improving to 9-6 (1-1) on the season. Four Colon
0 comments
By Cardell Dudley

Sophomore guard Jordan Roland was on fire all game finishing with a career high 27 points on 9 of 13 shooting It's been going on all season, one player stepping up to carry the load to ensure victory for the Colonials and last night, it was Jordan Roland's turn. Roland poured in a career high 27 points to lead George Washington (8-4) to a 74-59 win over the University of Central Florida (7-3) . Roland's 27 points is also the high point total of the season so far for GW. Play
0 comments
By Cardell Dudley

Colonials point guard Jared Sina running the offense finished with 13 points on 3 of 6 shooting from deep Colonials came into today's contest against Penn State eager to right the ship after dropping the previous two contest. The task was made even more daunting with the absence of small forward Yuta Watanabe, who was sitting out with a calf injury. The Nittany Lions made for some rude guest as they handed the Colonials their third straight loss, 74-68, at the Smith Center. I
0 comments
Cardell Dudley

GW forward Tyler Cavanaugh posted a double double with 24 points and 10 rebounds in the win It was a festive night at the Smith Center as the Colonial's raised the 2016 NIT Championship banner in front of GW faithful. Problem was, University of Maryland- Eastern Shore wasn't in a festive mood. The Hawks led by senior forward Bakari Copeland 21 points gave GW all they could handle for the majority of the game, however the combination of Tyler Cavanaugh (24 points and 10 rebou
0 comments
By Cardell Dudley

Great battle between Colonial forward Tyler Cavanaugh (18 points, 13 rebounds, 5 assist) and Bulldog center Enuoma Ebinum (20 points, 9 rebounds) During George Washington's media day, forward Tyler Cavanaugh mentioned an excitement to finally "beat up on someone else," visiting Bowie State had other plans, as they came out swinging hard and often putting GW on the ropes in the first half. However, the Colonials regrouped in the second half behind the tenacious play of Cavanau
0 comments 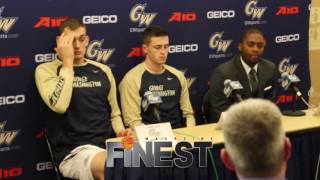 George Washington hosted it's annual media day to introduce the 2016-2017 men's and women's basketball team's respectively. The men's program is coming off a successful season with an 2016 NIT Championship and a eventful summer to say the least with a head coaching change and graduation of Joe McDonald, Patricio Garino and Kevin Larsen, undoubtedly one of the best classes in Colonial history. Those three combined to start 383 games in their careers. GW now looks to former ass
0 comments
By Cardell Dudley

On Point along with Kenner League commissioner Van Johnson celebrate after winning the championship 118-111 over the previously unbeaten Tombs "Yo Cardell, we play in the championship...and we we're gonna win it too" said On Point forward Raymar Watson. So it wasn't surprising to me at all that Watson was the happiest and loudest person in McDonough after the final buzzer sounded cementing the Kenner League (Nike DC Pro City) championship for On Point. He was celebrating the
0 comments
By Cardell Dudley

Darren McClinton All Stars guard Nate Britt (North Carolina) defends On Point point guard Tre Kelley (South Carolina) In day two of Kenner League quarter-final action, Hoop Magic All Stars defeated Higher Level 84-78 in game one and On Point pulled away late to knock off Darren McClinton All Stars 78-72 in the second and final game of the day. Hoop Magic will face top seed Tombs at 2 pm and On Point will take on Clydes at 3:20 pm on semifinal Saturday. The winners will play
0 comments
By Cardell Dudley

Remember Them Days - The Shot That Elevated GW Basketball Once Again

GW guard Maurice Creek's game winning jumper sent a message locally and nationally that the Colonials were indeed back It was the "shot" heard throughout DMV basketball circles. With 8 seconds left and the game tied at 75, GW guard and Maryland native Maurice Creek took the ball and hit a step back jumper over Maryland's Nick Faust to give the Colonial's a 77-75 win over the Terp's. The shot by Creek had more significance than just winning the game, that shot sent a strong me
0 comments
By Cardell Dudley

Colonial seniors Patricio Garino and Kevin Larsen combined for 32 points and 21 rebounds in the quarterfinal win GW senior leaders Joe McDonald, Patricio Garino and Kevin Larsen weren't ready to end their outstanding collegiate careers, ESPECIALLY on their home floor, in the NIT quarterfinal match-up against visiting SEC heavyweight Florida Gators. The trio has been a part of big wins over high major programs all season long, however, high optimism that the Colonials would b
0 comments
By Cardell Dudley

George Washington forward Tyler Cavanaugh and center Kevin Larsen combined for 36 points and 18 rebounds in the win As the saying goes, "it's not how you start but how you finish" and for GW guard Alex Mitola this phrase summed up his night perfectly. Mitola despite being 1-8 from the field and 1-5 from 3-pt range prior, with the game tied at 80, drove the ball in the final seconds of regulation an hit an off balance game winning jumper to push the Colonials into the second
0 comments
Cardell Dudley

GW junior forward Tyler Cavanaugh finished with a game high 19 points and 6 rebounds in the loss to VCU In a game that had NCAA Tournament implications, GW looked to sweep the season series against A-10 power VCU. The Rams had other plans as GW fell to VCU 69-65 in a intense A-10 battle. The Colonials were led by junior forward Tyler Cavanaugh's game high 19 points and 6 rebounds, while senior center Kevin Larsen added 15 points, 7 rebounds, 3 assist and 2 blocks. Like in the
0 comments
By Cardell Dudley

GW would fight to cut the lead to a three point deficit early in the second half before St Joe's pulled away for good Leading up to the game, an obvious key for GW if they wanted to walk off the court victorious was to contain St Joe's deadly duo in senior forward Isaiah Miles and junior guard DeAndre Bembry. Things didn't go according to plan. GW would fall to St Joseph 84-66 despite all Colonial starters reaching double digits in scoring. Junior forward Tyler Cavanaugh led
0 comments
Cardell Dudley

GW senior guard Patricio Garino finished with 17 points on 6 of 11 shooting in the win over Davidson George Washington from the start looked energetic and sharp defensively and it only sparked their offense. GW led by Patricio Garino (17 points) would jump out to a 20-12 lead at the 11:10 mark. However, Davidson would make a run behind the shooting of senior guard Brian Sullivan and cut the lead to two, trailing 22-20. Back an forth affair that brought four lead changes ende
0 comments
1
2