Stanford senior forward Erica McCall and George Washington senior forward Caira Washington battled all night with both finishing with double-double's The saying goes that basketball is a game of runs, and if the run is big enough, it can be the difference in a win or loss. This applied totally to George Washington's (7-5) 71-52 loss to #14 Stanford (9-2) in which the Colonials saw the Cardinals go on a 30-9 run in the second quarter that blew the game wide open. The first qua
0 comments 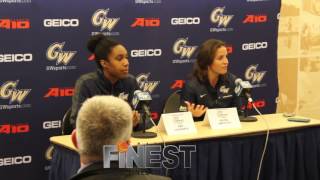 George Washington hosted it's annual media day to introduce the 2016-2017 men's and women's basketball team respectively. The Women's program ushers in a new era with the hiring of head coach Jennifer Rizzotti. Rizzotti, a former UConn standout and head coach at Hartford where under her watch, she guided the program to 316 victories, five American East Championships and six NCAA appearances, is looking to build on the recent success of the program and take it to new heights.
0 comments
By Cardell Dudley
NCAA, A-10

Graduate Student Lauren Chase was dominant, posting a double double with 19 points and 10 rebounds in the win As tip approached, many felt this would be a big test to see if the Colonials are a serious threat to potentially make a deep run come tournament time as they hosted the hot St Louis Billikens. St Louis came into the game winners of seven straight and a game back of GW and were looking to exploit the void in the paint due to GW's standout center Jonquel Jones sitting
0 comments
By Cardell Dudley
NCAAWBB, A-10,

Lauren Chase finished with a an efficient 10 points (5-9 FG), 8 assist, 4 rebounds and 2 steals GW entered the game against La Salle looking to extend their winning streak to nine games. At the start, GW was off to say the least. Missing numerous shots combined with unforced turnovers is not a recipe for success. The sloppy play however didn't last long. GW after an uncharacteristic sloppy opening quarter in which they led 17-10, would use a 17-0 run in the second quarter to
0 comments
By Cardell Dudley

Junior forward Caira Washington was unstoppable scoring 20 of her game high 23 points in the first half George Washington junior forward Caira Washington had as great a first half as a player can have, scoring 20 points (9-15 FG) and grabbing eight rebounds, seven offensive, to help lead the Colonials to a 85-58 win over Grambling State. GW jumped on Grambling right from the start and wouldn't be threaten throughout the game. Junior guard Shannon Cranshaw knocked down a caree
0 comments
By Cardell Dudley

GW sophomore forward Kelli Prange finished with a game high 21 points on 9 of 12 shooting from the field The level of optimism is at an all time high for the GW women's program. The talent on hand has brought huge expectations for a deep NCAA tourney run come next March, although, they have a lot of business to handle before then. Sunday, we had our first look at the loaded GW Women's team and they didn't disappoint, cruising to a 95-47 win over Christopher Newport. Sophom
0 comments

GW Sophomore Caira Washington finished with 13 points and 5 rebounds in the win By Cardell Dudley Bowie State entered the Charles E Smith Center with upset on the mind. Facing a GW team without one of their key players Jonquel Jones who is out with a foot injury, Bowie State saw a void in the middle that they could possibly exploit to leave with a win. Things sometime does not work out quite as planned. GW would literally run Bowie State off the floor as they would cruise to
0 comments